I used to blog on another platform. Check out what I shared in earlier years here.

At the beginning of the term we created potatoes for our characters  for our movie. Mrs Agnew brought potatoes which  were growing roots and were disgusting to look at. When I picked my potato it was dirty and it felt rough. I used  four sticks for the legs so it could stand; I got two three eyes and glued them onto my potato; I used coloured material for the clothes, and a ribbon for no reason and last of all I got pipe cleaners and cut them into little pieces for hair. They were pink and blue and made my potato look trendy. I enjoyed making my potato.

After we made our potatoes we went into groups  and we had to try making our own stop motion movies.  We were making slow motion movies, and there were Director, Camera person, Scene manager and last of all Editor. My group and I made a few movies and we had lots of fun making our movies but we didn’t get to edit it all because we ran out of time. Making movies was hard because the camera kept moving and moving  because sometimes when we were moving the ipad, it would sometimes fall down or we would move it too quickly and not small moving.

When it dried we brought it up and placed it on the table and then we had to sit back down, and think of some names for our movie. We had to vote and first we had to call out the names of the movie we liked and Ms Toland wrote our answers on the board. When we finished picking we had to vote. Mostly everyone picked the Stolen Princess so now our movie is now called the Stolen Princess. This is a brief outline: the spaceship went to space to try and save the princess from the aliens because they wanted the crown. They had kidnapped her at her own birthday party but it has a happy ending.

We had great fun making our class movie. I’m excited for next term because we get to see it on the big screen. Hope everyone enjoys watching. 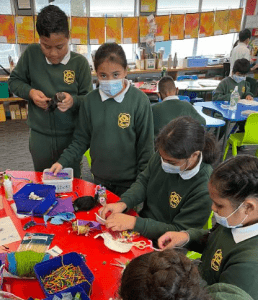 8 thoughts on “Making our Class movie.”

About Me | Ko Wai Ahau

Add the link to the About Me blog post here.

Keep connected with this blog